Ode to a Bruise: 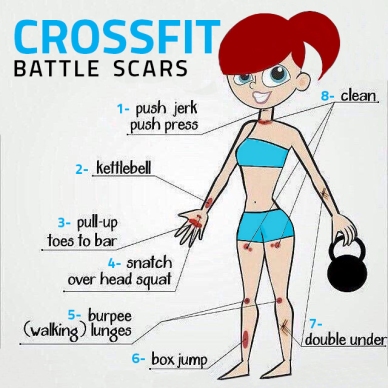 It means I worked hard.

Today you hit me good.

Swollen and black and blue.

Yet I PR’ed my Snatch.

What else could I do?

A bruise is a badge of honor.

I tell myself this when I accidentally bump you.

You deserve to exist.

Today I got a nasty bruise (also known as battle scars) in the pocket while power snatching.  It hurts.  But at least I know my form was good.  And it was worth it:  I PR’ed!

If you’re like me, you constantly have bruises from CrossFit.  Some causes are known.  The majority for me are unknown.  On my legs.  Thighs.  Shins.  Foot.  Arms.  Fingers.  Collarbone.  Knees.

Annoying.  Yes.  But it means I worked hard.  And long.  And progressed.  Visible signs that sometimes I need when progress in areas is so small that you don’t see it.

So, yes, bruises–constant bruises–are a part of CrossFit.  Almost as much as community and competition, camaraderie and strength.

So to you bruise:  Go ahead!  Come!  I accept your challenge.  Because in the end it makes me stronger.